At some point in their career, every audiophile has had to make the difficult decision of which piece of equipment to utilise.

You may use our list of the finest Music Production Software for everyone, from novices to experts alike. Choose the DAW that best fits your style and the one you’re most comfortable with. Here are six of the best music-making apps. 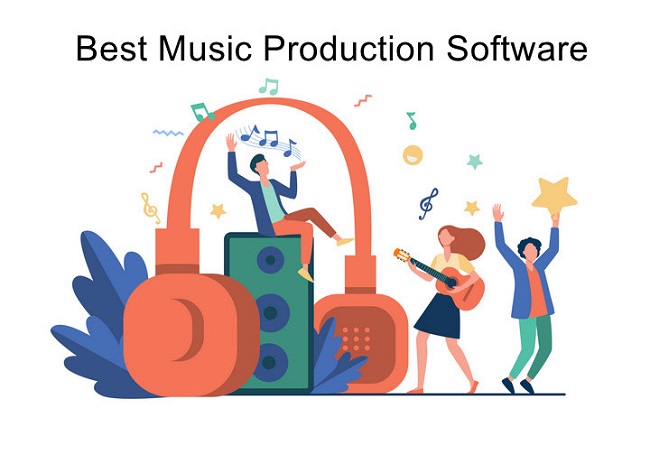 FL Studio is unequalled as a digital audio workstation (DAW) in the music industry. Everything a music producer could possibly need is right here. Pre-installed samples make this software a must-have even for those who have never used it before.

In comparison to its rivals, it has a 32-channel mixer with effects like Chaining and Compression. Although it may seem overwhelming at first, once you get the hang of it, it’s a joy to drive.

FL Studio is a paid DAW, but its capacity to meet the needs of nearly everyone justifies the cost. FL Studio has four different packages that you may choose from, and you just pay for what you use. FL is available on both Windows and Macintosh platforms.

Audacity is one of the best audio editing software on the market. It has the ability to handle intensive editing because to its ability to edit many tracks at once and record.

One of its best features is an automatic repair tool, which includes destructive waveforms, a compressor, and noise reduction. Unlike many other editors, this one supports a large variety of audio formats.

It has a wide range of plug-ins and generators, making it incredibly versatile. There is only one drawback to this fantastic piece of software: a really unappealing user interface.

Its enormous popularity can be attributed in large part to the fact that it is both free and open source. It is compatible with both Windows and Mac operating systems..

One of the most powerful tools you’ll ever use, Adobe Audition is a beast. It is a Digital Audio Workstation meant for the more experienced musicians in the industry.

For example, it has an adaptive noise reduction function that intelligently removes undesired noise. It can be used as a recorder and mixer, as well as a generator.

The favourites bar is a great area to keep your most often used favourites. There are several options for customising the user interface. An expensive piece of audio software like Audition is still worth it because it offers so many features in a single package.

Unlike other tools, this one charges you on a monthly basis based on a dynamic pricing model. Audition is compatible with both Windows and Mac.

When it comes to innovation, Apple has always been a leader. For the first time, Logic Pro X is a fresh Digital Audio Workstation that anyone who has ever used it will enjoy. Logic Pro is a terrific pick because it comes with an incredible number of extra Plugins, Generators, and much more.

Flex-Time, which lets you alter a single waveform without having to edit the entire track, is one of its independent features. Smart Tempo, which automatically matches the BPM of several tracks in a playlist, is another.

There are a lot of audio formats that Logic can handle, like the previous DAWs. It has a complicated UI, especially for beginning users, and the software costs a lot of money. Only the Mac operating system is compatible with it.

Steinberg created Cubase, a DAW (Digital Audio Workstation). All skills, genres, and budgets can benefit from our top-notch Music Production Software. This is one of the most adaptable pieces of music software you can acquire, with a variety of variants to suit different purposes.

Unique features like frequency equalisation and auto-pan make it one of the most venerable players in the music industry. To defend the software, Cubase employs a plug-in named Sentinel to examine newly installed plugins and generators for potential vulnerabilities.

The user interface, like that of most DAWs, is somewhat challenging for newcomers to master. It’s compatible with both Windows and Mac, and it’s a reasonable price.

Ableton has established itself as one of the most popular DAWs for electronic music production thanks to a number of high-profile performers.

All the audio and MIDI tracks can be played at the same time. You get an extra 70GB of free presets, plugins, and generators. Ableton has swiftly established a supportive network for newcomers to the industry.

The user interface (UI) is a bit of a pain to use and doesn’t appeal to everyone. Students and educators can save a lot of money with Ableton’s special discounts.

Using Ableton is a no-brainer, thanks to their certified training course and extensive tutorials. It is compatible with both Windows and Mac operating systems..

Top Online Notepad Text Editor You Can Use On Your Daily...

3 Best Google Apps You Must Download in Your Phone